My Review Of "Doll Factory" 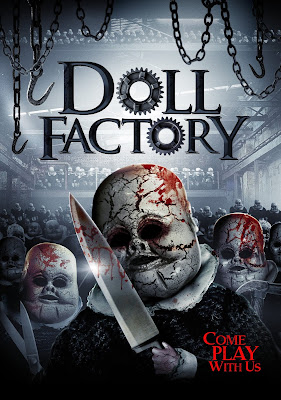 A group of teens break into an abandoned doll factory and unwittingly release a curse that brings hundreds of killer dolls to life to terrorize a small Texas town.

"Doll Factory" is a simple, traditional story that has been a big part of indie horror since the early days of the subgenre's resurgence with the rise of film companies like Full Moon, and cult horror movies like Child's Play and "Dolls". They are fun, campy and easy to watch. This film is no exception. From the retro-inspired beginning right to the very end "Doll Factory" is just an entertaining ride into madness.

The characters are developed just enough to be interesting. The parts are played to the limit of camp theatre. The cast are fully committed and the fun they are having in this movie shows on screen. I easily felt, based on characters and story structure, "Doll Factory" could have been a Full Moon Horror production. At the least it has to be a love letter to Charles Band.

The puppetry is creative and the Dolls are demonic. There are elements of occultism that reminds me of the voodoo ritual in "Child's Play" and the black magic rite performed in "Dracula A.D. 1972. Then the whole killer doll rampage is total "Demonic Toys" B roll. The CGI is reasonably done and the practical effects are fun. Most of the horror elements are cool low-budget tricks that you expected in this type of movie.

Overall I really had fun watching "Doll Factory". It is cheesy and full of madness, all on a low-budget scale. The film will not please fans looking for high production levels or blockbuster effects. But if you are a indie horror fan that enjoys Full Moon horror movies and Charles Band then you will like this film too. (3.5/5)
Posted by A Southern Horror Fan