My Review Of "Scooter" 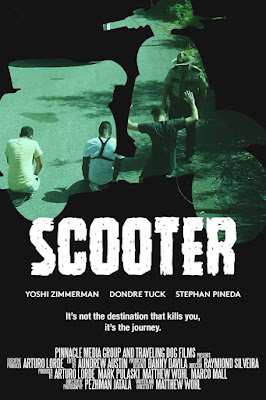 Three YouTubers set out on an 866 mile adventure on scooters. However, they find out that it's not the destination that will kill you, it's the journey.

"Scooter" left me feeling conflicted. One, you should always suspend disbelief. Horror is fantasy, and by its nature "not grounded in reality". Two, never go into any film with some preconceived bias. I found myself constantly putting my belief in those rules in check while watching "Scooter".

First off, the story is legitimately fresh. It is completely generation Z relatable material, which automatically makes this scenario an acceptable premise. I bought the set-up. I even started out actually liking the movie. Thought it could have gotten to the horror portion sooner, but given how things fall apart once it does begin, maybe not.

This is the conflict with myself watching "Scooter" , within a minute of the gut-wrenching, powerful "bad thing" is witnessed I through many flags on the play. Plausibility, a need for realism, and a problem that plagues all found footage hits hard against this movie's action thriller momentum. Would you keep filming, and during the horror- is this really how one would respond.

"Scooter" begins to display its main flaw. The character logic, and respnse to the danger becomes more about getting good scenes on film as opposed to making sure that it looks as if the cameras just captured these doomed characters fatal road trip. Which sucked for me as a reviewer because there is some quality stuff here and "Scooter" could have been a break out film.

Overall "Scooter" started strong but fell apart hard. The premise is a good story to tell, the horror elements are harsh and cold moments of found footage candy. Unfortunately though those pesky issues of plausibility and a need to convince me this is real- which ultimately is the objective and validity of the found footage genre- just wreck the ability to easily and honestly enjoy the film. (2.5/5)
Posted by A Southern Horror Fan