A new trailer and one-sheet has been released for upcoming satirical horror "Triggered". The film is set for release later this year courtesy of Wild Eye Releasing. 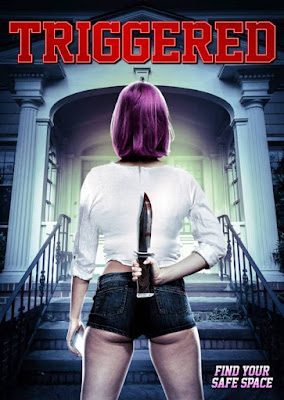 Callee Bishop has a lot of issues. Besides the fact that her town is full of braindead bigots, there’s a serial killer on the loose and, now, no one’s taking her problems seriously. With the help of her friend, Ian, Callee devises a plan to get the attention back on her and her issues by faking an attack from the killer. Callee’s plan backfires when the real killer sets their sights on the two friends in an effort to make them the victims they’ve been claiming to be. How can Callee and Ian find their way out of their web of lies before the killer claims them as yet another one of their many victims?