My Review Of "Blood Craft" 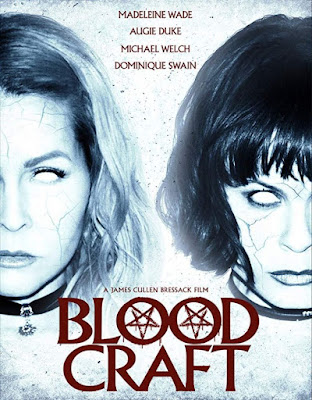 Two sisters who suffered abuse as children at the hands of their sadistic father decide, after his death, to use witchcraft to bring his spirit back to get revenge.

"Blood Craft" mixes elements of the occult with deeper aspects of human tragedy, and reconciliation. The story plays with this in a chilling character study of scar tissue and a desire for closure. It starts with a dark, gritty, fetish kick and impulsively you are forced to really face the protagonist in a very"unpolished" state. The intention of both the director and the story becomes clearer later in the film. "Where you are in life is relative to your past".

"Blood Craft" is far from the typical witchcraft movie. There are these familiar tropes of some really bad guys, black magic, and revenge, Bressack's story goes deeper. There is human suffering, victimization, and pain as a catalyst. And in classic fashion and true to his nature, James Cullen Bressack explores those elements in harsh flourescent light, as blunt and uncomfortable as the truth.

The acting is palatable for the most part, the lead seems to draw emotion from a sort of 'shell-shocked' pool of survivor's guilt and doesn't really change gears, but the second lead is a disturbing, uneasy mix of "victim / devil's advocate, very convincing. A plus for "Blood Craft" is the fact that given the weight of the material woven into this supernatural nightmare, all the cast do great at delivering.

The special effects mix both practical and CGI. And to its detriment, works nicely, minus a couple of moments. The horror aspects are visceral and full of delicious occult affectations that offer enough eye candy for the fan of witchy horror. The film is low budget in both style and implementation. The cinematography is great and the music score fits perfectly with the heavy nature and dark overture of the picture. Now it works on a low budget scale so don't go in expecting an updated retelling of "The Craft". Overall I say check it out, it's classic Bressack filmmaking. (3/5)
Posted by A Southern Horror Fan