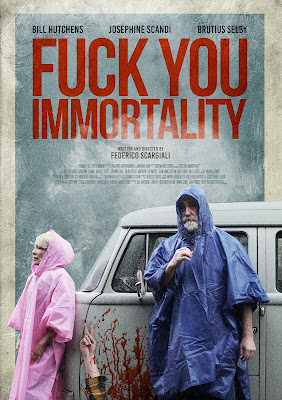 FYI is a black comedy with some horror elements, film is actually hitting markets for worldwide release. Federico Scargiali is an Italian director, this is his debut movie, shot in english with international actors.

The official poster and first teaser trailer for Federico Scargiali's black comedy F**k You Immortality have been released.

FYI depicts the adventure of Tony and Kacy, two hippies with one obession: find their old friend Joe who apparently never aged a day since they were young. Vegans, drug enthusiasts, and with their roots firmly planted in the 70s, the couple will soon discover that Joe is immortal, but tired of his eternal life. In the name of their old friendship, Tony and Kacy will try their best to help their friend fade into the after life, but nothing seems working. Through bloodthirsty ninjas, angry metalheads, wrestlers, shamans and ancient rituals, the two embark on a journey with no turning back.