My Review Of "Elves" 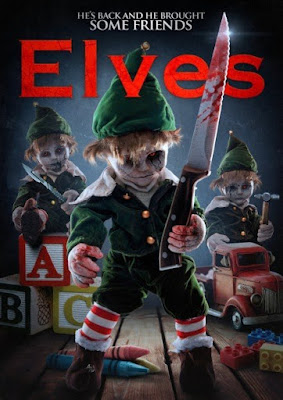 The Holiday Reaper, a ruthless killer that terrorized a small Texas town, has been caught. While celebrating, a group of friends find an elf inside a magical toy box.  When a freak accident kills one of them, they discover a group of elves have been scattered throughout town, each representing one of the seven deadly sins.  It’s a race against time to survive the elves’ wrath before Christmas ends.

"Elves" is a mash-up of horror tropes, loosely wrapped in bad holiday spectacle. The story plays on the concept set forth in 2017's "The Elf" only in the weakest of manner. Choosing instead to move in more creative avenues, "Elves" throws in demonic possession and mysterious masked slasher cheer - just in case psychotic killer elf dolls weren't enough of a holiday melody in nightmare.

The acting is a mix bag of choppy dialog, contrived emotion, and incoherent exposition. There are some moments when the cast hit the mark, but mostly the drama and action alike seem a symphony of sterilized animatronic directives - none of which show any understanding of character motivation. Either from talent level or storytelling capabilities who knows.  I venture a bit of both. Normally you accept some lax in degree of quality in acting ability -acceptable,  but usually good writing and quality content balances it out.  "Elves" fails in all three categories. : (

The cinematography is decent enough and sound is quality for the most part , even though it is drawn from a very stereotypical pallet. Still it works. Special effects are a blend of practical and CGI choices. The kills aren't inventive,  but they are fun. As many horror elements fail, as do work. Budget restraint is noticeable but "Elves" has a few good kill sequences. Sadly though many of the elements that play out in this holiday horror fall flat. Overall "Elves" is disappointing,  even for low budget indie horror. (2/5)
Posted by A Southern Horror Fan