You're All Invited To A "Monster Party" This December 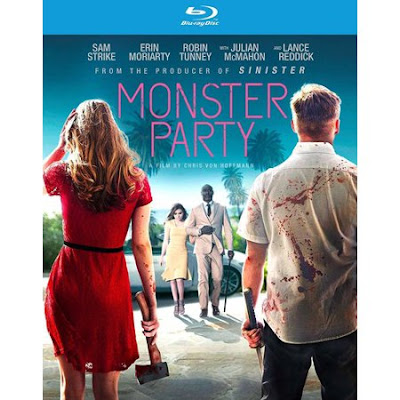 RLJE Films will release the horror/thriller film MONSTER PARTY on DVD and Blu-ray on December 18, 2018.
In MONSTER PARTY, three thieves who plan a daring heist posing as waiters at a fancy Malibu mansion dinner party in hopes of paying off an urgent debt.  When their plan goes horribly wrong, the trio realizes the dinner guests are not as innocent as they seem and their simple cash grab becomes a violent and desperate battle to get out of the house alive.
Written and directed by Chris von Hoffmann, MONSTER PARTY stars Julian McMahon (“Nip/Tuck”), Robin Tunney (The Craft, “The Mentalist”), Sam Strike (Leatherface), Erin Moriarty (Blood Father), Lance Reddick (John Wick), Brandon Micheal Hall (“Search Party”), Virginia Gardner (Halloween) and Diego Boneta (“Scream Queens”). RLJE Films will release MONSTER PARTY on DVD for an SRP of $27.97 and Blu-ray for an SRP of $28.97.
Posted by A Southern Horror Fan