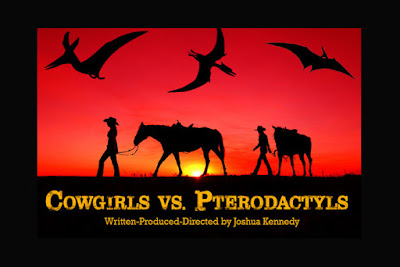 The crowdfunding campaign is still underway for stop motion creature feature "Cowgirls Vs Pterodactyls", Directed and written by Joshua Kennedy. The campaign is set up on Indiegogo.com.  "C Vs P" stars Madelyn Wiley, Carmen Vienhage, and Haley Zega. It features the work of fx master Ryan Lengyel.

The year is 1888 and an enormous prehistoric pterodactyl has been preying upon a small Texas desert town. When her husband is eventually taken by the creature, rebellious schoolteacher Rebecca Crawford decides to take matters into her own hands. She enlists the help of local brothel keeper Debbie Dukes Riley Masterson III and down-on-her-luck sharpshooter Bunny Parker to help track the monster down before it lays more of its dastardly eggs.