My Review Of “Psychophony: An Experiment In Evil” 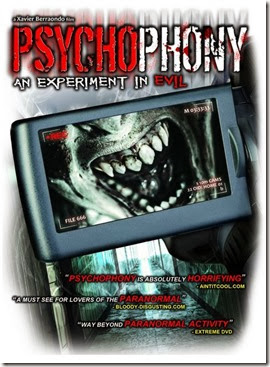 “Psychophony: An Experiment In Evil” is a paranormal thriller from Spanish director Xavier Berraondo that follows a theory that aspects of schizophrenia under the label of psychophony (auditory hallucinations) has a very tangible paranormal component for some patients. The film stars Ferran Albiol, Raul Alvarez, Dafnis Balduz, Ferran Carvajal, Leyla Fernandez, Merce Montala, and Miriam Planas Claudia Pons, not that many of us here in America would recognize the actors I just like to give them props. This film was released in 2012 and has some pretty great reviews so it was relaxing to sit down to review this foreign flick myself.

The story deals with Dr. Helen Jara, who in the mid 2000’s carried out a series of psychological experiments on a group of patients with schizophrenia. Dr. Jara, attempting to prove that these patients' hallucinations were of paranormal origin, creates unsanctioned experiments that result in her death along with Parapsychologist Matias Kram, and his assistant. The authorities discover EVP’s and other evidence of paranormal activity.  The youngest patient has the most directed paranormal interaction being attacked by the entity. The movie is actually a reenactment of the experiment and events that happened with “real video” and “real EVP” clips patchworked into the story.

For me, “Psychophony” is proof the Euro horror can be boobless, assless, and goreless and still be entertaining. The film offers a mixture of “found footage” elements wrapped in a perfect chilling surreal melodrama. The acting and directing in this film is pretty tight with very few moments of “down time”, where dramatic hook is concerned. The character study combined with the almost stoic personalities of the characters creates a nerving atmosphere. There is no emotion until emotion is needed in the approach to this film so when the drama does unfold it becomes heightened and tense. The paranormal aspect to the story is as chilling as it gets plus the whole “is it for real or just media ploy” aspect to the stories foundation (the experiments themselves) adds a discomforting component that kept me on guard. Normally you would expect this to hinder the entertainment value but Berraodo weaves in portions of the “real” stuff so seamlessly and effortlessly that it just adds an extra creep factor to the film’s context.

The special effects are kind of on the cheaper side (think Syfy channel) but they are done with complete respect to effect to the overall film. There is no gore or nudity so this would easily be a full family sort of scare film. If your family doesn’t mind subtitles. All in all “Psychophony” continues a strong line of horror in the Spanish community and over all European horror community in general. The story is captivating, the acting is believable, and the frights are hitting. It ends on a kind of expected cliché moment but considering this is all genuine events being retold it all works to bring a pretty cool paranormal story to horror fans.
Posted by A Southern Horror Fan