Release Details For “I Am ZoZo”

Release details have come out on horror film “I Am ZoZo”. The feature shot entirely on super 8 and directed by Scott Di Lalla will be available on DVD / VOD November 19th 2013. “I Am ZoZo” stars Kelly McLaren, Courtney Foxworthy, Demetrius Sager, Caleb DeBattista, Caleb Courtney and Darren Wayne Evans. The film is based on real experiences with an ancient and malevolent spirit called ZoZo that attaches itself to people exclusively through Ouija boards. “I Am ZoZo” was shot last fall on location on San Juan Island, WA and Seattle. Also if you haven’t already then check out the trailer below. 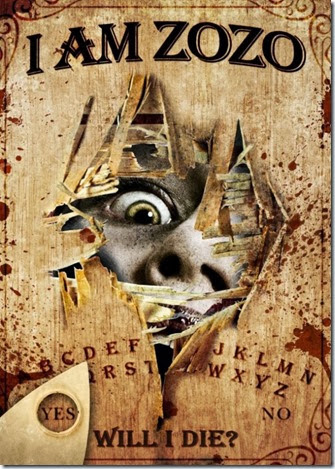 On Halloween night, five teens decide to liven up their party with some innocent fun: by summoning the spirits. At first, it’s all nervous laughter and scoffing. Then, the night takes a sinister turn: the board reveals truths, exposes secrets it cannot possibly know, and triggers inexplicable events within the darkened house. As the session continues, an entity reveals itself: Zozo. And as the terrified teens are about to discover, once you make contact with this ancient, demonic force, you’re no longer playing a game… the game is playing you. A pulse-pounding, edge-of-your-seat supernatural thriller based on multiple reports of spirit board encounters with this savagely malicious spirit.