The first official poster has been released for Australian horror sequel “Wolf Creek 2”. The film marks the return of one of the most nail-biting, thrilling serial killer franchises in modern cinema. “Wolf Creek 2” also sees the return of director Greg McLean helming the project. The trailer will be unleashed online on October 21st. “Wolf Creek 2” stars John Jarratt, Ryan Corr, Shannon Ashlyn and Phillipe Klaus. The film hits Australian theatres on February 20th 2014. No word on when a North American release will happen.

Lured by the promise of an Australian holiday, backpackers Rutger, Katarina, and Paul visit the notorious Wolf Creek Crater. Their dream Outback adventure soon becomes a horrific reality when they encounter the site’s most infamous local, the last man any traveler to the region ever wants to meet; Mick Taylor (John Jarratt).

As the backpackers flee, Mick pursues them on an epic white knuckled rampage across hostile wasteland. Only one will remain to be dragged back to his lair to witness the true magnitude of his monstrosity. And if the last man standing is to have any hope of surviving where no one else has survived before, he’ll have to use every ounce of cunning to outwit the man behind the monster and become every bit as ruthless as the monster inside the man. 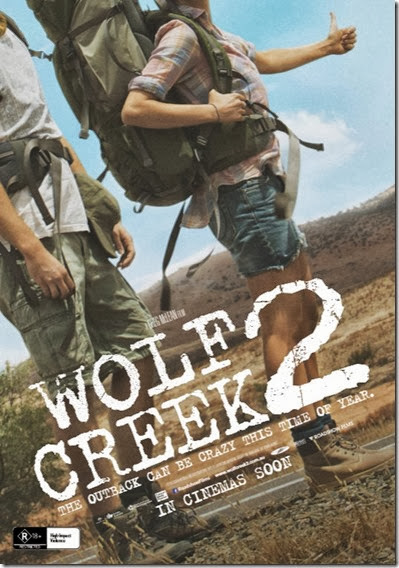