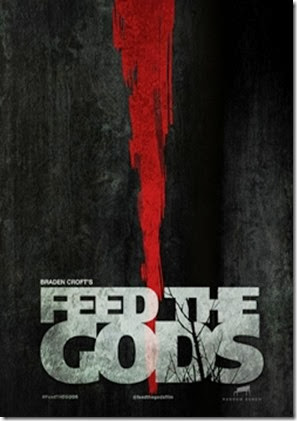 Braden Croft’s “Feed The Gods” is in production. The new horror feature is from the director behind “Hemorrhage”, which was hailed by VARIETY as “an auspicious debut… sure to achieve cult status” and E-FILM gave it ‘four stars,’ calling it “a compelling horror that puts the ‘psycho’ back in ‘psycho-killer.’” “Feed The Gods” is expected to be completed by the end of the year and stars Shawn Roberts, Tyler Johnston, Emily Tennant, Britt Irvin. The film is considered equal parts, Sam Raimi, Peter Jackson and “Cabin in the Woods,”.

When slacker/aspiring filmmaker Will (Shawn Roberts, “Resident Evil: Afterlife”) finds the parents of his adopted brother Kris (Tyler Johnston, The Killing), he sees the opportunity to get some closure for his brother, as well as maybe capture a heartwarming reunion on camera. With Kris’ fiancé Brit (Emily Tennant, “Jennifer’s Body”) in tow, the three of them head out to discover this long-lost family. What they are unprepared for though, is what exactly the cryptic small town has in store for them. Weird locals abound and rumors of a Bigfoot creature haunting the area at first seem silly… but things quickly escalate into a frantic, scary and action-packed nightmare with more than a few casualties along the way.
Posted by A Southern Horror Fan