My Review Of “Curse Of Chucky” 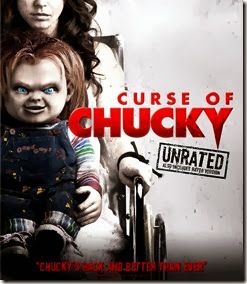 “Curse Of Chucky” is the latest sequel in the iconic horror franchise. The film is directed by Don Mancini  and stars Danielle Bisutti, Brad Dourif, Fiona Dourif, A Martinez, Maitland McConnell, Brennan Elliott, Chantal Quesnelle, Jennifer Tilly and Summer H. Howell. “Curse Of Chucky” offers a full circle tribute to the franchise while maintaining an original and fresh concept. This film also offers a more serious and darker story reminiscent of “Child’s Play” 1 & 2. A story that was more chillingly horror driven than tongue-in-cheek shtick that the franchise later became known for.  A mysterious package arrives with the infamous doll, with the soul of a serial killer, to a home of Sarah and Nica. Sarah is a struggling mother on meds and daughter Nica is in a wheelchair. Of course this being a return to the horror, mommy dies expectantly. After that the rest of the family gather at the house to break bread and bury the mother. Yeah that hardly gets off the ground thanks to the great little re-gift from the beginning of the film. Chucky proves still full of murderous rage and evil intent.

“Curse Of Chucky” takes on a darker story and classic haunting atmospheric personality right from the beginning. It is a clean, strong and well thought out story to say the least. It is obvious that this sequel was not made just for the sake of twisted quick-wit banter and almost comical kill scenes from a Good Guy doll. Personally I feel satisfied in knowing that I can squeeze this sequel right into the series just after 1 & 2 and be happy or even as numero 6 considering the cool, slightly cheeky ending.

The special effects, and cinematography was classic horror atmospheric thrills. Camera tricks that accent the shadows, moments of sudden shock for real reason, and creepy sound effects played well against a truly freaky setting. Location is everything in a horror film and “ Curse Of Chucky” brings the spooky old house back to the foreground of horror. The characters are well written and offer just enough personality to connect with without becoming annoying or pretentious. Chucky himself was on screen and evil enough to be convincing and entertaining without looking completely childish or lame. That is a big part that makes the 3-5 sequels more stoned amusement than actual tales of terror. His presence is very strong and chilling on screen much like in the original and the second film which puts “Curse Of Chucky” as a great horror film and killer sequel. Blood and gore is limited to the absolute moments of necessity with the kill scenes sharing in the overall film rather than trying to become some overloaded spectacle. “Curse Of Chucky” is a awesome horror movie and one that any horror fan, especially of the “Child’s Play” franchise will definitely enjoy.
Posted by A Southern Horror Fan