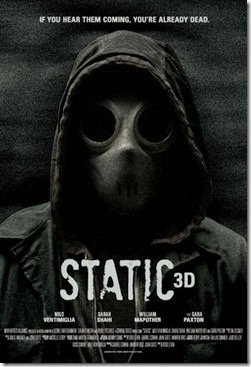 New images from the horror film “Static” have been released. Check out the masked killers under the cover of darkness. “Static” is directed by Todd Levin and stars Milo Ventimigli, Sarah Shahi, William Mapother and Sara Paxton. The film is due out on October 8th.

While coping with the tragic death of their child, a young novelist (Ventimiglia) and his wife (Sarah Shahi) are struggling just to keep their marriage alive. Their broken romance is put to the test when a mysterious girl (Paxton) shows up at their door in the middle of the night claiming masked prowlers are stalking her. The ominous situation turns even darker when the dangerous hooligans show up at their door to wreak havoc. As a game of cat and mouse ensues, the couple must work together to survive and uncover the mystery behind the attack. Soon past secrets begin to unfold… for better or worse.