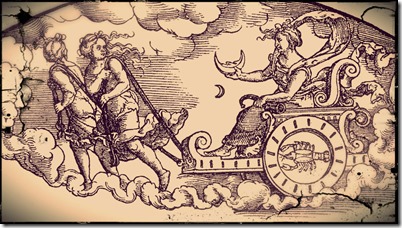 August 24th marks the second festival to the Roman Goddess Luna, the first being March 31st. Luna is the divine embodiment of the Moon (Latin luna; cf. English "lunar"). She is often presented as the female complement of the Sun (Sol) conceived of as a god. Luna is not always a distinct goddess, but sometimes rather an epithet that specializes a goddess, since both Diana and Juno are identified as moon goddesses. Luna's attributes are the crescent moon and the two-yoke chariot (biga). In the Carmen Saeculare, performed in 17 BC, Horace invokes her as the "two-horned queen of the stars" (siderum regina bicornis), bidding her to listen to the girls singing as Apollo listens to the boys.

Sacrifices to Luna were held at this time on the Graecostasis; and the first of three days when the mysterious ritual pit called the mundus was opened. (I guess it goes without saying that if this holiday is one to incorporate in your modern spiritual calendar of festivals then the sacrifices should be symbolic.) The temple of the moon goddess Luna on Aventine Hill was the site of worship, feasting, and wild dancing orgies. The untamed character of those abandoned revelries was the source of our word 'lunatic'. As the Goddess of the moon, Luna is associated with witches with moon magic, transformations, the psychic and all things feminine.  She represents growing awareness, the fulfillment of love, and the mystery of enchantment.   She is often pictured with a crescent Moon on her head. Since she is also known as the bringer of light, she is shown carrying a torch in her hand.
Posted by A Southern Horror Fan