My Review Of ‘The Orphan Killer” 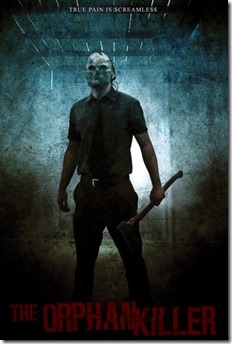 “The Orphan Killer” is a modern slasher horror that builds upon the classic elements of psycho killer lore with thoughtful, surreal aesthetics and brutal blood-spilling force. The film is directed by Matt Farnsworth and stars Diane Foster, David Backus, Matt Farnsworth, James McCaffrey. The film has one of the coolest and cruelest killers in the slasher genre. The story follows Audrey Miller and her homicidally delusional brother Marcus Miller. Siblings whose world is turned upside down by a home invasion that leads to the murder of their parents. Orphaned then separated, the two kids lives lead in very different directions. One prospers in the community while the other becomes a monster of urban legend that haunts the halls of the orphanage. Audrey soon faces her past with excruciatingly painful objectivity.

The story of “The Orphan Killer” is truly a modern, creative one with a new evil stepping up to the horror plate creating a nightmare perfectly framed in the aspects of religious grandiosity. There are certain little moments that take from various elements of the story’s slasher genre past that act more to highlight and pay tribute to Matt Farnsworth love of the genre, moments that are best left for the fan to discover than to point out in this review. I just have to say that even though I noticed small moments that are reminiscent of some horror classics, pretty much every aspect of this film has a unique feel and vision all it’s own. “The Orphan Killer” does truly offer up a new nightmare killer and powerfully intimidating horror icon.

The acting and visual style of “The Orphan Killer” somehow blends the surreal and American grindcore cinema  techniques effortlessly. The continuity and unease of atmosphere that echoes through the film provides a nonstop intense, chilling ride into hell. There were moments in the film I had to look away from the graphic display, not from a weak stomach but because the seen was so intense I needed a moment of relief. The characters in “The Orphan Killer” are straight forward, grounded characters and yet there are some moments in the story that display widely unnatural behavior-but I am not Catholic, nor did I grow up in a Catholic world so I don’t know if nuns really fantasize about sucking cock. Maybe they do. Anyway this movie is pretty epic in it’s storytelling, artistic style and character integrity both with the killer and the protagonist.

“The Orphan Killer” is truly one of those great indie horror films that gets it all right. The story is morbid, dark and intense. The acting and action is thrilling from almost the word go. The kill sequences and special effects are gruesome and realistically unsettling. The soundtrack rocks and the The Orphan Killer himself is a true, terrifying force of evil that isn’t easily forgettable. This film is definitely one to see for all horror fans.
Posted by A Southern Horror Fan