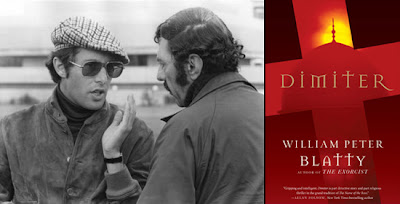 The first collaboration between director William Friedkin and author/screenwriter William Peter Blatty. Dimiter, a supernatural suspense thriller set mostly in Jerusalem, is a novel that’s been out and around since mid-March. Billy Friedkin is eager to direct it as a film. Here’s a synopsis of the novel:


In 1973 Albania, Colonel Vlora (aka the Interrogator), the head of a team of torturers, questions the Prisoner, who the reader later learns is Paul Dimiter, an American clandestine agent referred to in some quarters of the world as ‘legendary,’ while in others as ‘the agent from hell.’ (Rumor has it Dimiter poisoned Ho Chi Minh while the Vietnamese leader was visiting Albania shortly before his death in 1969.) Dimiter escapes to Jerusalem, where he encounters a number of engaging characters, including a doctor of neurology, a sharp-tongued nurse, and a grief-stricken Israeli policeman. The complicated plot confounds until the isolated pieces of the psychological puzzle that’s Dimiter match up and fall into place, revealing surprising truths.