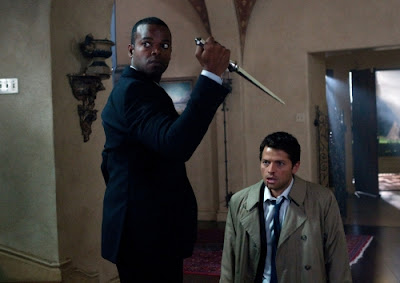 Supernatural Episode 6.3
“The Third Man”
Written By: Ben Edlund
Directed By: Bob Singer
Original Airdate: 8 October 2010
In This Episode...
Sam and Dean investigate the biblical deaths of three cops.  The first turned to a puddle of blood.  The second was covered with huge, hideous boils - inside and out.  The third had his brain eaten away by locusts.  The boys call Cas, and he explains that these deaths could only be as a result of Moses’s staff.  Several of heaven’s weapons were stolen, and in the wrong hands - Raphael’s soldiers - they could bring about the apocalypse the Winchesters fought so hard to avoid.
Turns out the three cops shot a young man, then planted a gun on him to make it a just killing.  The guy’s little brother prayed and prayed for the cops to suffer consequences.  His prayers were answered by Balthazar, who sold the kid a small piece of Moses’s staff to use to get his own vengeance.  Balthazar is one of Raphael’s soldiers.  They want to rule heaven because they are “traditionalists” and want to get the apocalypse back on track.  Whoever has the weapons wins the war.
Cas, Dean and Sam find Balthazar, who calls for Raphael and a few of his cronies.  A very brief battle ensues (see below).  The lackeys are killed off almost instantly. Balthazar turns Raphael to salt with the help of a magic crystal.  Dean traps Balthazar in a ring of holy fire, but once Balthazar gives the kid his soul back, Cas sets him free.
read the rest here...
Posted by A Southern Horror Fan