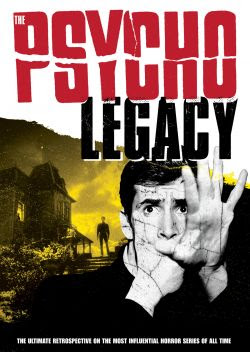 The "Psycho: Legacy" 2 Disc Special Edition DVD from Shout! Factory explores the history, impact and mystique of Psycho and the films that it spawned. In addition to the 90-minute documentary feature by filmmaker Robert V. Galluzzo, the set boasts more than three hours of bonus material, including extended interviews, an hour panel discussion with Psycho star Anthony Perkins, Psycho on the Web, a tour of the Bates Motel, and much, much more.
The Psycho Legacy, written and directed by Robert V. Galluzzo, follows the indelible filmmaking legacy left by the Psycho movies and unravels the screenwriting, casting and directing of all the movies, examining their undeniable longevity and success. Interweaving rare and never-before-seen interview footage with Anthony Perkins and dozens of interviews with the films’ cast, crew, writers and directors including Robert Loggia, Olivia Hussey, Henry Thomas, Diana Scarwid, Tom Holland, Hilton Green, Mick Garris, Richard Franklin, as well as other writers and directors in the horror genre, including Stuart Gordon (Re-Animator), Adam Green (Frozen), Joe Lynch (Wrong Turn 2), Michael Gingold and Tony Timpone from Fangoria, and many more, THE PSYCHO LEGACY is the first documentary to unite and explore decades of Psycho movies in one place, revealing surprises and insights into what is considered the "grandfather of modern horror."