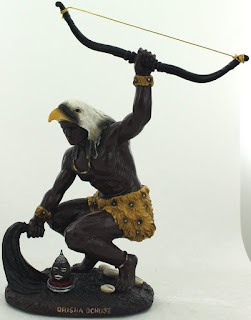 Lukumi Feast Day for the Orisha Ochosi, the Divine Hunter.

The deities or gods worshipped in Lukumí religion are called orishas. All the orishas are direct emanations and representatives of Olodumare whom He created and placed on earth to aid and supervise humankind. The orishas serve as mediators between the cosmos and as the major means of communication with the Supreme Being.

Oshosi is the orisha of hunting. He protects all those who are persecuted unjustly and punishes the guilty. Close friend of Elegbá and Ogún: they share many of the same domains. Fugitive slaves would plea to Oshosi, seeking his aid to escape from their white masters. They invoked Oshosi so he would impede their being found since Oshosi is known to have the ability of going into the densest of forests and finding his way out without the slightest difficulty. Yet Oshosi does not live in the forest.


Though Oshosi enters the forest, he does so only to hunt. Oshosi is an urban orisha, residing in Obatalá’s compound. He was Obatalá’s favorite hunter and rendered all the fruits of his labor to the creation divinity. Most of his life was spent in the service of Obatalá and living within his palace and not in the forest.
Oshosi was the first Yoruba wizard or magician. The Yoruba word oshó means wizard. The Lukumí often associated him with the Bantú magico-religious practices known in the island as Regla de Congos or Palo Mayombe. As a result, many include a Congo vititi mensu, divinatory instrument prepared and employed by the Bantú priests. Oshosi has no roads.
Celebration: June 6
Garments: Dark Blue and gold, ornamented with hides and cowries
Beads: Dark blue, amber, & red, with coral and jet beads
Ritual implement: Bow and arrow
Sacrifices: He-goats, deer, agoutis, roosters, quails, pigeons, guinea hens, and all hunted animals.
Taboos: None
Ritual Numbers: 3, 7, and 21
Posted by A Southern Horror Fan