My Review Of "Pet Graveyard" 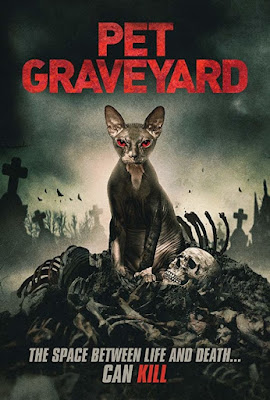 "Pet Graveyard" is a sort of mock-up of a few different films, most notably"Pet Sematary" and "Flatliners". It is directed by Rebecca Matthews and
Stars Jessica Otoole, David Cotter, Rita Siddiqui, Claire-Maria Fox, Andrew Hollingworth, and Hattie Willow.

The film concerns a group of friends tormented by the Grim Reaper and his sinister pet after they undergo an experiment that allows them to revisit the dead.

The obviously cheap ploy, with the title, aside, the film plays with very familiar horror tropes decently. The supernatural, reaching the spirit world, and the eternal longing for an understanding of of death. All these, only in a twisted nightmarescape where delving into the darkness can be deadly.

The acting faulters throughout the film, character development is only slightly developed to a level that only supports scene staging and we never really get to connect emotionally. Most of that seems to stem more from a lack of character committment than story. Still there is enough present to tell a complete story, The things lacking cause a lack of energy, suspense and elevated level of horror desperately needed.

"Pet Graveyard" does implore practical elements, which are always a plus and something I really enjoy. There isn't much of a musical score to to amplify the feel and thrill of the movie, overall. It kicks in during the kill shots but often it feels clunky and does little to accentuate the moment. Overall, the film never reaches it's potential, and there is a lot of that present in"Pet Graveyard". Check it out but don't expect too much. (2.5/5)
Posted by A Southern Horror Fan