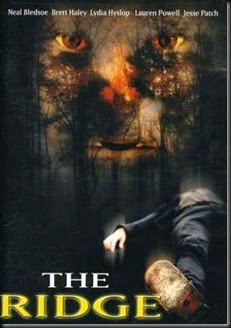 “The Ridge” is directed by Brett Haley and stars Neal Bledsoe, Brett Haley, Lydia Hyslop, Lauren Powell, Jesse Patch. The film is a contemporary horror that draws from the urban legend of The Ridge Runner, a brutal killer out to slaughter anyone who settles on his land. “The Ridge” begins slow and clunky but within the first fifteen minutes the atmosphere becomes a nonstop slaughter fest. Okay maybe a bit more than fifteen minutes but the point is what starts as a questionable flick turns into a real chiller.

The story opens with the cliché set-up of friends on a getaway. Only within the first few moments of arriving to the house, nestled in the woods, things get eerie. The dialog is flimsy, random, and doesn’t really seem to lead into the story, at least not until the standard “do you know a scary story” moment. That is when we are introduced to the urban legend of the brutal ridge runner. There are moments when the story, even the telling of the legend, feels contrived, but for the most part it is a plausible premise. It is obvious though that most of the writing focused on action and kills based on the weak dialog. So at first the film starts off shaky. But when the sh*t hits the fan, the film almost transforms into something totally new.

The special effects are pretty tight. The attention to presenting killer scenes and action sequences is obvious in “The Ridge”. The house plays a big role in the film with so many rooms, levels and areas for the killer to pop out from, The night shooting and sound effects help create a traditional horror look, that will be recognizable to horror fans. From the moment the first body is found, explaining the eerie beginning to the film, “The Ridge” really goes full throttle giving total slasher entertainment. The soundtrack at times feels hokey-hallmark-y, but I can over look the style of music used to create an emotional continuity to the story.

Overall “The Ridge” turns into a pretty decent indie slasher film. The fact that the horror just happens, with no justification other than a faceless killer pissed about loosing his land, only adds to the nightmare. There is some pretty stellar directional choices and cinematography in “The Ridge”. Honestly if the dialog and first part of the film would have had the strength that pops up in the second and third act then this would have been a ten for me.
Posted by A Southern Horror Fan