My Review Of “A Bothered Conscience” 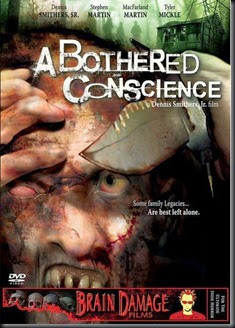 Dennis Smithers Jr’s “A Bothered Conscience” is a dark character asseveration of cold, driven horror. The film stars Dennis Smithers Sr., Stephen Martin, MacFarland Martin, Thomas King, Tim Turner, Dannial McCoy and Tina O'Neal. The plot is more or less an open one with a father taking brutal measures, and cruel tutorship, in raising his son to protect the family land from outside influence and trespass. “A Bothered Conscience” really proves that indie horror can be done and done well.

Full description is as follows: Deep in the remote Arkansas backwoods, a father passes on the traditions of the Ozark mountain men to his 5 year-old son. Under his strict and cruel guidance, young Lucas learns to protect the family land at all costs, and hones the skills of the hunt that have been handed down from generation to generation. But their prey is no ordinary game. . . because the McGavins are hunting trespassers!

Twenty years later, when his father is murdered in a savage act of retribution, Lucas is left alone to preserve the twisted family legacy. Desperate to live up to his father's expectations, the pressure and isolation soon begin to take their toll. Haunted by visions of a violent past, Lucas becomes more dangerous with each passing day, and his ability to distinguish reality from hallucination quickly dissolves. Ghostly figures lurk in the shadows of the unforgiving forest, taunting him with their screams as they claw their way ever closer. They are everywhere. . . and nowhere. But have the rotted.[IMDb]

“A Bothered Conscience” is a stark, nearly flawless tragedy of sorts, filmed with an effect that hearkens to late 70’s video nasty days, Smithers captures all the raw, edgy elements in “A Bothered Conscience”. It is a story that plays out harshly and matter-of-fact with characters that almost feel both protagonist and antagonist simultaneously for most of the film, until the real protagonist comes forth near the end. The dialog is minimal but effective, character dramatics are short bursts of terror or just straight chilling shock as most of the interactions are of a brutal nature.

The acting is mediocre but very committed to the story. The atmosphere is very reminiscent of classic gore flicks like “Stanley” or “ Let’s Scare Jessica To Death”. Only the surreal is almost non-existent until the last act, most of the film is a visceral nightmare that unfolds plainly, with calculative bluntness. Although there is no layered visage to the characters, “A Bothered Conscience” creates a powerful, straight forward modern video nasty that is very entertaining.

Special Effects and soundtrack are mild but clear elements that really make “A Bothered Conscience” a good film for gore-hounds and horror fans. The effects are smart, thought out tricks that offer gruesome moments to kill scenes without looking cheap, or cheesy. The blood is convincible enough, the deaths are creative and effective emotionally to the scene. Honestly it is amazing that “A Bothered Conscience” was shot on a shoestring budget of 2,300 dollars.

The soundtrack is an instrumental chorus of highs and lows that fit perfectly, I found myself having to keep saying “this is a modern film and not a previously unreleased video nasty from the late 70’s. I didn’t really expect much from “A Bothered Conscience”, and true the acting isn’t stellar, but everything works, and I enjoyed everything about this film.
Posted by A Southern Horror Fan