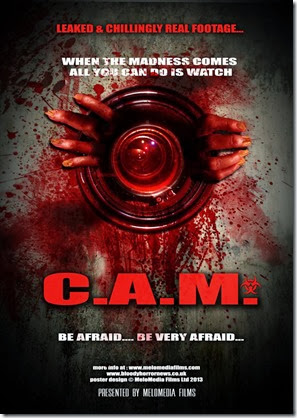 Check out the trailer for zombie found-footage film “C.A.M.” The film is directed by Steve Du Melo, Larry Downing and stars Helen Ayres, Charlotte Curwood, Daniel Jeary, Tom Ware and Roger Wyatt. “C.A.M.” comes from UK’s MeloMedia Films. Read what details there are for the film below.

Disease control discover that food at a local meat processing plant has been contaminated by a rare parasite. Trainee tactical police are sent in to evacuate the workers with a civilian camera crew to film the operation. All is not what it appears, for what they discover could have disastrous repercussions on a world wide scale. Feature created from actual footage.


CAM FILM TRAILER (warning: this video contains graphic images that may upset some viewers) from Steve Du Melo on Vimeo.
Posted by A Southern Horror Fan