New “Texas Chainsaw 3D” Poster Does Nothing For Me


I hate to one of those people because I really have no big issue against remakes. I learned over the years to view them totally separate from my beloved franchises that I grew up on. However even though I first was thrilled about the new “TCM” flick being made the more I see and hear on this film just does more to dissolve my excitement for the movie. Now with this new poster I am already bored. The mask is irritating because they went in the opposite direction by making it look less like the iconic Leatherface mask instead of making a more enhanced awesome version of the mask. This one just looks like a bad mud facial thing instead of someone’s actual face skin. However I will still see the film and it’s mediocre premise play out just don’t think it will happen for me at the theatre. 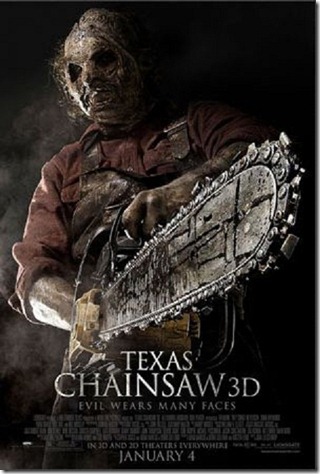 Lionsgate’s TEXAS CHAINSAW 3D continues the legendary story of the homicidal Sawyer family, picking up where Tobe Hooper’s 1974 horror classic left off in Newt, Texas, where for decades people went missing without a trace. The townspeople long suspected the Sawyer family, owners of a local barbeque pit, were somehow responsible. Their suspicions were finally confirmed one hot summer day when a young woman escaped the Sawyer house following the brutal murders of her four friends. Word around the small town quickly spread, and a vigilante mob of enraged locals surrounded the Sawyer stronghold, burning it to the ground and killing every last member of the family – or so they thought.
Decades later and hundreds of miles away from the original massacre, a young woman named Heather learns that she has inherited a Texas estate from a grandmother she never knew she had. After embarking on a road trip with friends to uncover her roots, she finds she is the sole owner of a lavish, isolated Victorian mansion. But her newfound wealth comes at a price as she stumbles upon a horror that awaits her in the mansion’s dank cellars.
From The Press Release
In 1974, one movie changed the face of horror. In 2013, a dark new chapter begins...
TEXAS CHAINSAW 3D opens nationwide January 4th, 2013!!
With gruesome surprises in store for a whole new generation, TEXAS CHAINSAW 3D stars Alexandra Daddario (Heather Miller) and Dan Yeager (Leatherface), Introducing Tremaine ‘Trey Songz’ Neverson (Ryan), Scott Eastwood (Carl), Tania Raymonde (Nikki), Shaun Sipos (Darryl), Keram Malicki-Sanchez (Kenny), James MacDonald (Officer Marvin), Thom Barry (Sheriff Hooper), Paul Rae (Burt Hartman), Richard Riehle (Farnsworth) along with special appearances from four beloved cast members from previous installments of the franchise: Gunnar Hansen (the original Leatherface), Marilyn Burns, John Dugan and Bill Moseley.
Directed by John Luessenhop, from a screenplay by Adam Marcus & Debra Sullivan and Kirsten Elms, based on a story by Stephen Susco and Adam Marcus & Debra Sullivan and based on characters created by Kim Henkel and Tobe Hooper, and produced by Carl Mazzocone. Lionsgate presents a Millennium Films production and Main Line Pictures production.