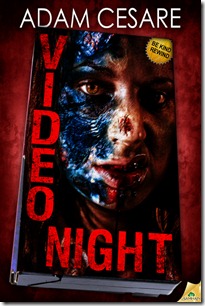 Who knows more about fighting a monster invasion than a group of teenage horror fans?


Billy Rile is smart, adept at Nintendo and has a killer Hi-Fi setup. Life is good. But he has no idea that an alien life form has infected his town, a creature that overtakes and transforms its host.

It could be inside anyone: a classmate, a pizza-delivery man, even the girl next door. When Billy’s weekly movie night is crashed by this otherworldly menace, he and his best friend and their dates will have to summon their courage and call upon all their horror-movie knowledge if they’re going to make it through Video Night alive.