Check out the trailer for “Million Dollar Crocodile”. This is said to be China’s first ever CGI produced monster movie. The film is directed by Li Sheng Lin. 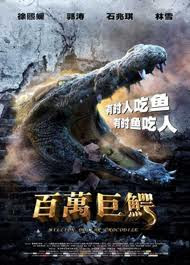 “Xiao (10) befriends Amao, a 36 foot crocodile, who lives on his fathers croc sanctuary. Soon his father is forced to sell the crocodiles to a gangster who plans to use them for high priced meals. Before Amao is slaughtered, he escapes slaying his captors in the process. In the chaos, Amao accidentally swallows a cellphone with the location of 1 million dollars. When the rumors of this spread, the locals are split in two: some afraid for their lives, others set out to capture and kill the crocodile at any cost.”