Someone had to of asked the questions “what do you get when you cross Bram Stoker with WWII Nazi Germany” because the answer is here!…Check out this cool poster for “Fangs Of War”. A killer re vision of Bram Stoker’s Dracula! 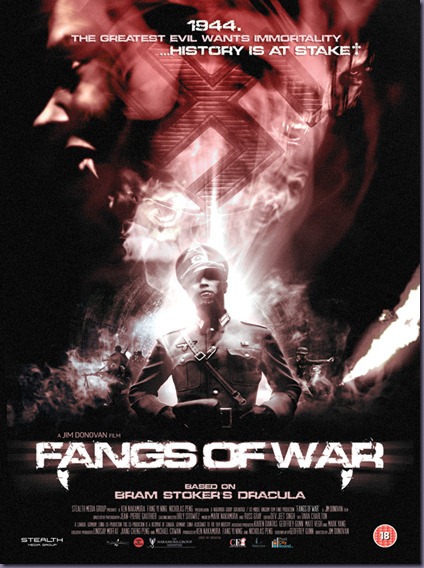 The Year Is 1944
The Nazi Supernatural Division has taken Castle Dracula and set up a secret lab there with one purpose and one purpose only: unlock the secret behind the legendary Count Dracula’s immortality.
The Allies however aren’t blind to the Nazi’s ambition, thanks to their man behind enemy lines, OSS agent RM Renfield. But when Renfeld goes dark in Transylvania, it’s up to Lieutenant Jonathan Harker to bring him back, along with the vital “intel” discovered at Castle Dracula.
Begrudgingly, Harker accepts the mission and travels with Dr. John Seward to Romania, where they meet up with members of Harker’s old covert ops team: Texas sharpshooter Quincey Morris and the beautiful and brainy Anna Van Helsing.
Together they plan a daring assault on Castle Dracula, but there’s more than just Nazis waiting for them behind the castle walls. Dracula himself and his blood-lusting Brides have a plan of their own, and they will stop at nothing to see it come to fruition. It will take every ounce of strength and every shred of ingenuity that Harker and his team possess if they’re to survive the night and stop both the Nazis and Dracula from reaching their goals…