My Review Of "Morbid Colors" 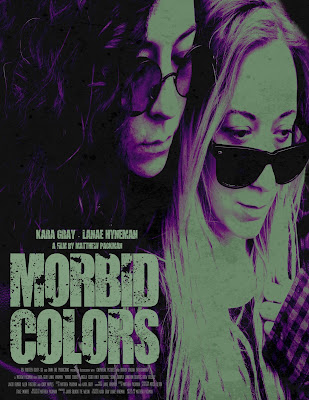 A tale of two foster sisters forced to hunt down a wealthy socialite believed to have infected the elder sibling with vampirism.

Packman's film takes on vampirism but does so with a very strong focus on a very human story. Family relationships, sisterhood, addicted and exploitation present a greater horror in "Morbid Colors" than the one of vampirism. The story is blunt, dark and formidable.

The film feels more guerilla, stripped down indie, creating an almost voyeuristic atmosphere. There isn't a massive amount of horror elements in the film as far as graphic gore, but there is more subtle elements of horror flowing through the film. Not to say that there isn't violence or blood, because there is. It just makes sense to the scenes instead of being bloody for the sake of blood.

Overall "Morbid Colors" is a great low budget indie film. It probably won't sustain the slasher crowd but it is definitely worth checking out. There is an almost arthouse vibe, and the human tragedy aspects of the characters are intense. (3.5/5)
Posted by A Southern Horror Fan