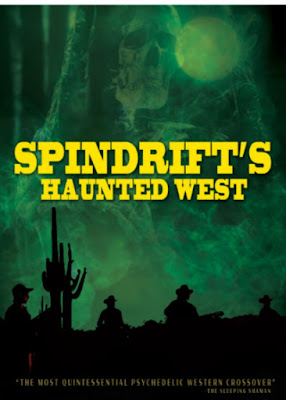 Spindrift is a U.S. psychedelic country western band. Recently, they travelled the American West for five weeks, where they exclusively performed in Ghost Towns and haunted locations. They documented all of their travels in the film Spindrift’s Haunted West. And Spindrift consists of: Kirkpatrick Thomas (lead vocals), Becca Davidson (guitar), Joe Zabielski (drums) and Riley Bray (Bass). Now, Indican Pictures will debut this rock-and-roll documentary on DVD and Digital platforms, this July.


On their travels, Spindrift performed at some of the mostly ghostly haunts. Their trip consisted of shows at the ghost town Bodie, CA and the Valley of Fire. They also had a pitstop at the Crazyhorse Monument in Wyoming. All of this travel and musical collaboration led to more music, including: “When I Was a Cowboy” and “Blood and Saddle.” Their latest documentary is full of breathtaking views and surreal musical performances. Fans of psychedelic rock can see for themselves what Spindrift has created - this July - on DVD and most Digital platforms.

A whiskey-soaked psychedelic spaghetti western visual tour-de-force that brings viewers a unique, peyote inspired look behind the curtain of madness and into the Haunted West of yore…
Release Date: July 2020 (Digital, DVD).