My Review Of "Agramon's Gate" 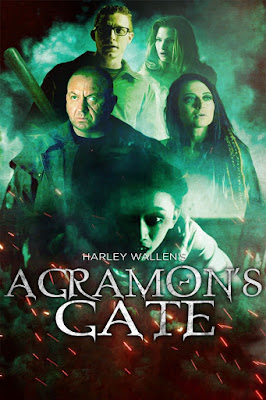 A psychic reader and medium is invited to a party. Something goes very wrong and an entity comes over from the other side to haunt the people from the party. They must solve the mystery before it’s too late. Agramon will not be easy to stop…

The story is a standard premises with an occult practice leading to so pretty ghosty stuff which terrorizes the cast. It isn't too mundane but it really doesn't raise any stakes, or offer anything new. The dialog is heavy and somewhat long-winded moments of mostly low-pulse drama. Still, the writing is more mature than most of the material found in such films.

The cast give good performances. Some stand out more than others, and there are times that over-stating the moment becomes a thing. That being said, their is some cool scenes as far dramatic, dialog delivery. Unfortunately though this never really leads to any real suspense or thrilling crescendo. The movie misses any opportunity to heighten the excitement level.

The special effects are your standard spook elements. Noises, things moving, and eerie music. There is never really a true since of horror, and even the jump-scare components seem too tame. Overall "Agramon's Gate" never really reaches the horror movie status that the plot suggests. Still as far as movie value, it does well as a psychological melodrama. Check it out if you want but don't go in expecting a scary movie. (2.5/5)
Posted by A Southern Horror Fan