My Review Of "Animal Among Us" 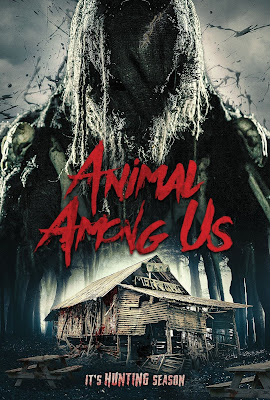 Horror thriller "Animal Among Us" is directed by John Woodruff. The film stars Don Frye, Christine Donlon, Jonathan Murphy, Erin Daniels, Heather Tom, Jasmine Dustin, and Whitney Davis. It is a bit of a psychological Russian nesting doll of a story that has it's moments.

Fifteen years ago, two teenage girls were murdered at Merrymaker Campgrounds. The case was filed as an animal attack, the camp was condemned, and the killer never found. But something horrific still waits in those woods, ready to kill again.

"Animal Among Us" starts out as a classic horror with decent characters, and interesting set-up points. There is a strong push to sell it as a creature feature. Which is done pretty well. Unfortunately, other than a few thrilling moments, the first hour drags, and the energy is almost non-existent. Which is disappointing considering it had an exciting start.

The acting is good. A couple of the characters seem to stall out somewhat, mostly the stereotyping does more to trip up an otherwise straightforward thriller, than they do to advance any story. It is clear these were put in as simple fodder for the killer. Still, there is some nice character interaction, quality acting, and good drama in a lot of the film.

The horror was a bit of a disappointment. There was some good kills that happened in "Animal Among Us" but they happen so quickly that you never get to enjoy those moments. Other than that, the horror elements offer atmospheric scenes of traditional creature horror. Until you get to the last third of the film. A surprise reveal, a horror trope switch off , and then a few more twists just muddle the story.

Overall "Animal Among Us" disappointed me a bit. It had a interesting start, great tease of some indie creature horror, and promise of some classic storytelling. Unfortunately the film isn't what I thought it was going to be, the pace was sketchy, and far too many surprise twists just ruined the entertainment value. It will have its fans, "Animal Among Us" has moments that work, but I have seen this type of gimmick ending done better without hurting the story.  (2.5/5)
Posted by A Southern Horror Fan