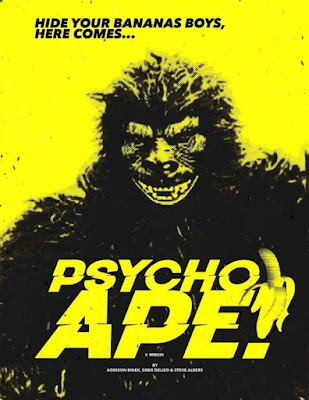 A crowd funding campaign has started for indie horror "Psycho Ape!". The campaign is set up over on Kickstarter. "Psycho Ape!" will be an Airplane!/Mel Brooks-esque spoof of John Carpenter’s Halloween, King Kong, and John Landis’ Schlock.


The ape costume itself was purchased for Halloween many years ago, and now it’s being used for this movie! In fact, shots of the ape will be used when he moves or turns around that reveal the seam on the back of the costume- truly reveling in the cheap humor of the whole thing.
Think Ed Wood filmmaking, but with excessive fake blood and comedy!(Basically a guy in a phony gorilla costume will be going around killing people with bananas.
A gorilla escapes from the Detroit zoo and begins a serial killing spree.
He is hunted down by the zookeeper, Dr. ZOOmis, played by actor Bill Weeden (Sgt. Kabukiman N.Y.P.D., Citizen Toxie: The Toxic Avenger Part IV) after massacring a teen girl slumber party.
Kansas Bowling (B.C. Butcher, Once Upon a Time in Hollywood) will play Nancy Banana, a monkey-loving ape-obsessed teenage girl, and sole survivor of the aforementioned slumber party banana massacre. She ends up writing a tell-all memoir about surviving “The Banana Murders.”
The ape is caught and incarcerated, where he is tortured and psychologically abused “A Clockwork Orange”-style, but eventually breaks out of jail during a poo-flinging prison riot.
The ape reunites with Nancy Banana and whisks her off to New York City, where the climax of the film ends in a big chase scene through Times Square and atop the Empire State Building a la King Kong.
Kickstarter
Posted by A Southern Horror Fan