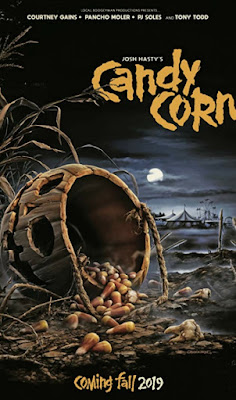 
"For the last three years of my life Candy Corn has been a labor of love that’s consumed my every waking moment. I had the most incredible team of filmmakers that stood behind my ambitious goals through a very trying and stressful production. When you spend this much time with something you had to consistently keep alive against all odds, the thought of handing it off to a distributor can be horrifying.

I spoke with a lot of interested distributors, but the conversations ended after my first call with the team at Epic Pictures and DREAD. They are leaps and bounds ahead of the competition when it comes to their passion and understanding for independent films like Candy Corn. Within ten minutes of our first phone call I felt like I was talking to people who had been a part of our team from day one, and would stop at nothing to get it in front of every Halloween obsessed, blood thirsty, cinema-loving eyeball in the world. I was often asked which distributor I hoped would take Candy Corn. I consistently stood by the notion that I would only sell my film to the distributor I thought would care about it as much as I do. That is the ultimate reason Epic Pictures and DREAD are putting out Candy Corn. And I couldn’t be happier." - Josh Hasty : about the acquisition.

"It's the eve of Halloween in Grove Hill, Ohio. A traveling carnival is in town for the weekend and local outcast, Jacob Atkins, has been hired as one of the freaks in the event's main attraction, “Dr.Death's Side Show Spook House Spectacular”. Meanwhile, a group of local bullies are planning their annual public hazing of Jacob, but this year things go too far."