Release Details And Trailer Announced For "I Spit On Your Grave: Deja Vu" 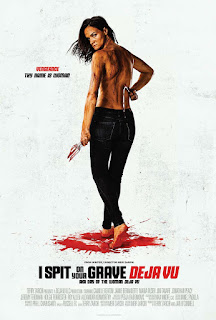 Reconnecting with a 40 year old story, the release details have been announced for revenge thriller sequel "I Spit On Your Grave: Deja Vu". The announcement came with a trailer and brings back original actress Camille Keaton, who played Jennifer. Jamie Bernadette, Jim Tavaré and Maria Olsen costar. It hits shelves April 23rd on DVD, Blu-ray.

This time around, Jennifer is back. After taking brutal revenge on her previous attackers, Jennifer is forced to face the families of those she murdered. Murder begets more murder. And, Jennifer is ready to continue her bloody path, with her daughter in tow.