My Review Of "Book Of Monsters" 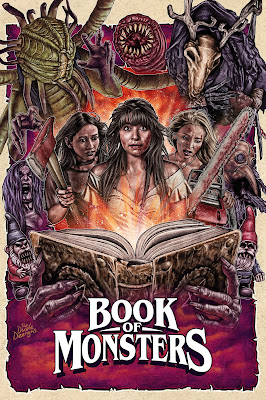 BOOK OF MONSTERS is directed by Stewart Sparke,  written by Paul Butler and stars Nicholas Vince, Lyndsey Craine, Anna Dawson, and Michaela Longden. It began life as a Kickstarter campaign back in 2017 with a unique twist - backers could to vote on six key elements of the movie including what form the monsters would take and how they killed their victims.

Sophie's 18th birthday becomes a bloodbath when monsters descend upon her house and start to devour the party guests. Sophie and her friends must rally together to send their party crashers back to hell.

"Book Of Monsters" is a fun, high energy, bloody good time. It is a micro-budget horror comedy that is reminiscent of classic 80's movies, such as "Evil Dead" and "Night Of The Demons". The story is a patchwork quilt of typical horror tropes, setups, and characters, but because Sparke knows the film he is trying to make,  the familiarity is more a tribute to the genre than a copycat. It isn't perfect, there are times the humor falls flat, or the scene stumbles a bit, but the pace and the energy over-takes any real flaws.

Special effects are blood-soaked, gory practical elements that soak up the spotlight in "Book Of Monsters". It's like an 80-something minute long episode of 'Todd And The Book Of Pure Evil' on steroids. Sparke goes for broke creating visceral scenes of carnage,  so much so that even the moments that fail are fun and enjoyable to watch. The creature designs, practical effects, and so many characters battling for "Scream Queen" gold are so captivating on screen.

Overall "Book Of Monsters" is a great indie horror comedy that gets so much right and does so much on such a small budget. There are some downers, the exposition material drags a bit- but how could they not after so much high energy scenes of monsters and guts and screams! For the most part "Book Of Monsters" is a must for indie horror fans, and is a prime example of why we love indie horror! (4/5)
Posted by A Southern Horror Fan