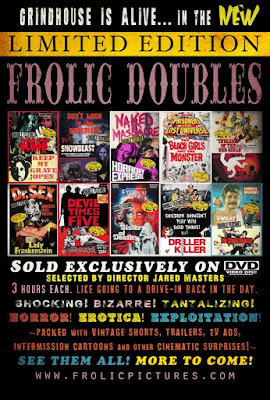 Rare horror, odd teen dramas, dark comedies, absurd action and more! The next wave of Frolic Pictures' new limited edition grindhouse series double feature DVDs are now available online, wherever DVDs are sold (Amazon, Barnes & Noble, Best Buy, etc.) Hand-selected by Hollywood exploitation filmmaker Jared Masters. A sordid combination of old school horror, vintage black comedies and juicy exploitation fare. Each DVD is a one-of-a-kind experience, like going to a drive-in back in the day, except in the comfort of your own home.

Each DVD is approximately three hours of shocking, bizarre, and tantalizing entertainment from a bygone era. Packed with cinematic surprises like short subjects, trailers, vintage TV commercials and intermission cartoons.

Digitally scanned from the original 35mm film prints! Be thrilled and pleasantly surprised with what the Maestro reveals across your screen. Screen at parties, make a double feature night with other cinephile friends, or simply enjoy them alone, as you turn on, tune in and drop out of your semi-important responsibilities.

Just pop the DVD in and let it play, thanks to Frolic’s clever auto-starting video discs. It’s like there’s a projectionist grinding out rare film prints for you at your leisure. Whether you’ve been to a real grindhouse in the 70s or 80s, or you’re discovering the sensation for the first time, these limited edition Frolic Doubles make the perfect show for the avid horror, cult, erotica and exploitation cinema fan. 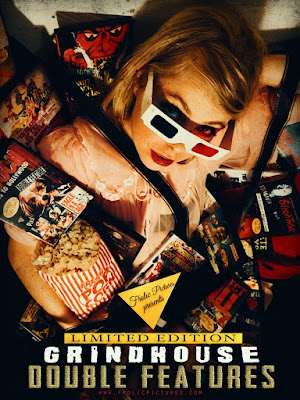 Order the new dream doubles now, and see what cinematic wonders await!
Tentacles / The Devil's Daughter
In Tentacles (1977), a mutated giant octopus wreaks havoc on a California seaside community. In The Devil's Daughter (1973), a young girl whose mother had sold her soul to Satan when she was born is told by Satan that she must marry a fellow demon.
Shivers / Rattlers
In Shivers (1975), people are being infected by a strain of parasites that turn them into mindless, sex-crazed fiends out to infect others. In Rattlers (1976), a herpetologist investigating a series of fatal rattlesnake attacks discovers that the creatures have been infected by a mysterious nerve gas disposed of in the desert by the military.
Witchboard / The Hearse
In Witchboard (1986), friends playing with an Ouija board at a late-night party unleash a demonic spirit who begins hunting them. In The Hearse (1980), a girl is haunted by a phantom hearse, which she believes is connected to her departed aunt, a witch with a bad reputation in town.
Partners / The Concorde... Airport '79
In Partners (1982), a straight police detective is unnerved when ordered to go undercover with a gay police clerk, as a couple, to solve a series of murders in the gay community. In The Concorde... Airport '79 (1979), pilots do whatever they have to to combat the attacks on their plane.
Flashpoint / Harry in Your Pocket
In Flashpoint (1984), two Texas border guards find a jeep buried for 20 years in the desert, with a skeleton, a scoped rifle, and a box with $800,000 in cash. In Harry in Your Pocket (1973), a would-be criminal is taken in by a professional in the game, who teaches him how pickpockets work in teams.

Paperhouse / The Death of Richie
In Paperhouse (1988), a young girl lost in the loneliness and boredom of reality finds solace in an ill boy, whom she can visit in a surreal dream world that she drew in her school composition book. In The Death of Richie (1977), a sensitive but confused teenager feels pressure on him from all directions and turns to drugs, which causes problems for him in school and at home.
Death Sentence / Race for Glory
In Death Sentence (1974),  a juror on a murder case begins to believe that the man on trial is innocent of the crime - and then discovers that the real killer is her own husband. In Race for Glory (1989), a member of an up and coming motorcycle racing team abandons his teamates to join a rival team.
Old Enough / Funland
In Old Enough (1984), twelve-year-old, well-bred Lonnie meets the impudent Karen on the street. They spend some time together and Karen teaches Lonnie some of her favorite pastimes, like make-up, shop-lifting and skipping school. In Funland (1987), when a mob family takes over an amusement park after the owner dies under mysterious circumstances, the recently-fired clown mascot seeks vengeance for the loss of his job.
Go Tell the Spartans / Cry of the Innocent
In Go Tell the Spartans (1978), during the early 1960s, U.S. military advisers in South Vietnam discover the same challenges that plagued the French army in Indochina ten years prior. In Cry of the Innocent (1980), a Green Beret-veteran businessman investigates the plane crash in Ireland that killed his family.
Sabata / Day of Anger
Lee Van Cleef double feature! In Sabata (1969), a master gunfighter teams up with his banjo-playing partner and a Mexican bandit to foil the town leaders of Daugherty, Texas. In Day of Anger (1967), a scruffy garbage boy becomes the pupil of a famed gunfighter.
Asylum / The Medusa Touch
In Asylum (1972), in order to secure a job at a mental institution, a young psychiatrist must interview four patients inside the asylum. In The Medusa Touch (1978), a telekinetic novelist causes disasters simply by thinking about them.
The Diamond Mercenaries / Dogs
In The Diamond Mercenaries (1976), a five-man team of professionals undertake a daring robbery at a diamond mine. In Dogs (1976), a pack of dogs go on a killing spree.

Evilspeak / Stunts
In Evilspeak (1981), an outcast military cadet taps into a way to summon demons and cast spells on his tormentors through his computer. In Stunts (1977), after a stunt man dies while he is involved in the making of a motion picture, his brother takes his place in order to find out what really happened. 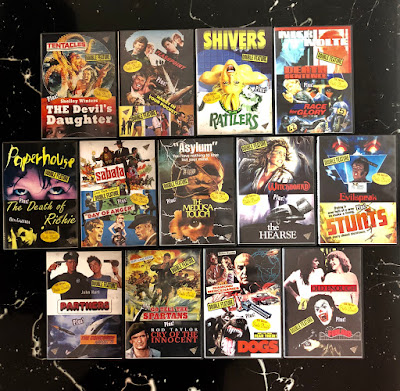 Collect them all! Only from Frolic Pictures! Visit https://frolicpictures.com/grindhouse-series/ for more info!

>
Posted by A Southern Horror Fan