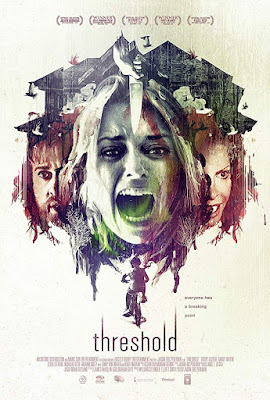 Upcoming horror film "Threshold" may see release towards the end of the year or early 2019. The film was picked up for distribution by Tombstone Distribution and stars Trilby Glover, Randy Wayne and Leslie Stevens. "Threshold" is directed byJason Eric Perlman.

A married couple is torn apart by grief. Seeking solace in New Age mysticism, wife Cynthia sees threatening omens in converging world events; news of apocalyptic weather, power outages, mass whale strandings. These strange circumstances strike close to home when the couple terrifyingly discovers an otherworldly woman hiding in their late son’s bedroom. Who is she? Why is she here? Her answers aren’t clear, but one thing is… she’s come to them with impossibly detailed knowledge about their lives and the circumstances of their child’s death. The mysterious woman promises a reunion with their lost son tonight… the end of the world. As Cynthia’s growing faith in the woman’s prophecies pulls her further from her husband Aaron and this world, the woman pledges to guide Cynthia across death’s threshold. Can Aaron save his wife from the danger of her own beliefs and discover the woman’s true intentions before it’s too late?. Source: http://thresholdmovie.com