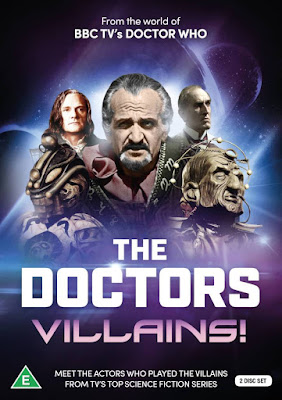 The Doctors: Villains! On UK DVD Now From Koch Media

For all Doctor Who fans, this 2-disc special collector’s edition is 5 hours of pure nostalgia, which will give you a whole new insight into the making of your favourite science fiction series!
With an introduction by Nicholas Briggs and Producer/Director Keith Barnfather.

This special release contains five in-depth interviews with IAN COLLIER (Omega – Arc of Infinity), BERNARD ARCHARD (Marcus Scarman – Pyramids of Mars), DAVID GOODERSON (Davros – Destiny of the Daleks), PETER MILES (Nyder – Genesis of the Daleks), JULIAN GLOVER (Scaroth – City of Death), plus a fascinating tribute to ROGER DELGADO (The Master) by the cast and production staff he worked with.