Cellar Door Releases First Trailer For "Ghost In The Graveyard" 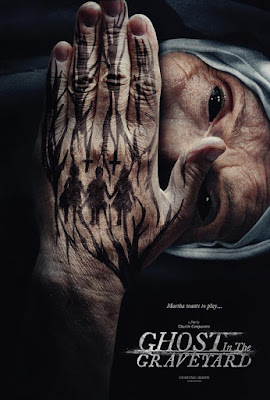 The debut feature of filmmaker Charlie Comparetto, Ghost in the Graveyard centers on a small town under siege from the ghost of a local girl who died tragically during a childhood game.  Worldwide rights are available through the producers.

A small town comes under the thumb of Martha, a vengeful ghost who returns to haunt the children who witnessed her death during a game of Ghost in the Graveyard in their youth.  Long blamed for the accident, Sally Sullivan (Berglund) must figure out why Martha has returned and how to get her to rest in peace for good.  As the mystery of her return unravels, deep secrets are revealed that will have consequences for everyone involved.