My Review Of "Betrayed" 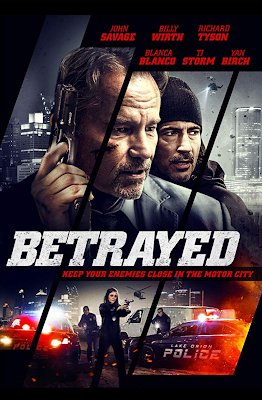 The mayor of Detroit ends his business with the Russian mob when young women are abducted and turn up drugged and dead. The best detectives (2 women) are put on the case. The Russians abduct the mayor's adult daughter as well for leverage.

Wallen's story is a straightforward deluge of corruption, crime, and gangsters. Told in a mix of neo-drama and mystery noir , the film offers a look into the dark underbelly of society, dishonest officials exploiting their power, gangs and sex trafficking young girls all on the mean streets od Detroit.

The directing and camera work are impressive in "Betrayed". The production is driven and focused, creating an indie stripped down formulaic product. Unfortunately the flow and consistency moving the main story arc is slightly disjointed and at times confusing to follow.

The acting is two-sided,  on one hand John Savage and Richard Tyson give quality performances when on screen, but unfortunately there are so many of the cast who give less than good portrayals. The characters are recognizable tropes familiar to this genre, but there really isn't enough originality to elevate the characters. Overall "Betrayed" lacked a strong performance and a level of action to really create the good movie that it should have been. (2.5)