Two new posters created by renowned La Boca Design Studios have been released for "Suspiria". Oft described as psychedelic and oversaturated, La Boca creates bold, pop art that bridges styles from contemporary to camp to commercial and beyond. All of which are evident in these new metaphysical conceptual designs. 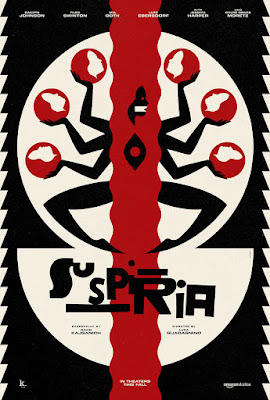 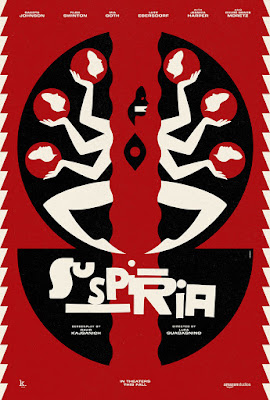 "When we received the invitation to create a poster for Suspiria we were delighted. As avid fans of Dario Argento’s 1977 Suspiria, we knew this was an adventure we had to embark on. Once we had seen the film we realized it was wasn’t really a remake at all, it’s an altogether different experience, and gloriously exhilarating and disturbing in its own unique way.” La Boca Studio has stated.
We decided to base our design around the ‘Volk’ dance performance which appears late in the movie. The dance is such a pivotal scene, full of all the right kinds of tension and energy. We set about creating the design as if it were a poster for Volk, almost so one could imagine the artwork appearing on a wall within the film itself. We wanted it to feel authentic to the movie, part of the story almost. To achieve this, the design needed to feel like it wouldn’t be out-of-place in a 1970s German dance school. For example, the teeth elements down the side of the poster are a reference to the floor tiles that feature in the reception of the school. When two posters are placed side-by-side they form an arrow just as they do on the floor.
The movement and body shapes in the routine led us to look for visual inspiration in Hindu art, specifically depictions of Nataraja, The Lord of Dance. This triggered the idea of a circular shape, representing the cycle of life. We imagined Dakota Johnson’s hair as fire representing light and dark, with her holding the fate of the dancers around her. At the center, an eye shaped opening reveals itself. All of which hopefully becomes clearer after experiencing the movie!
The typeface used for the credits is Eurostile, created by Italian designer Aldo Novarese, and used on the original poster for the 1977 film. The primary logotype is designed by the great Dan Perri, probably best known for his work on Star Wars, and a whole host of classic film art and branding.”
"Suspiria" hits theatres November 2nd. It is directed by Luca Guadagnino and stars Dakota Johnson, Chloë Grace Moretz, Tilda Swinton, Mia Goth, and Renée Soutendijk.
Posted by A Southern Horror Fan