David Arquette And Luke Wilson In The Electrifying "High Voltage"

David Arquette and Luke Wilson are starring in the electrifying  "High Voltage", previously titled "Hollow Body". The film has been picked up by SP Releasing for distribution. 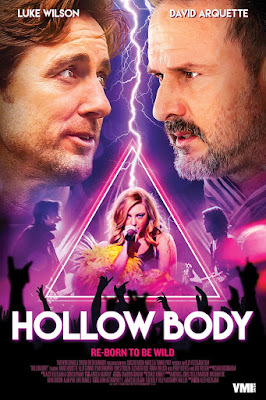 From writer-director-producer, Alex Keledjiam who created Project Greenlight comes the story of  “a struggling rock band led by washed-out rock star Jimmy Kleen (Arquette) that strikes a deal with a cynical record executive (Wilson). Things take a turn when the band’s lead singer Rachel (AllieGonino) and her controlling stage mother Barb (Perrey Reeves) are struck by lightning and killed. Rachel is brought back to life, but now lightning courses through her veins and she uses her new powers to drain the life from men and turn it into electrifying stage performances. Her bandmates discover her secret and must decide how far are they are willing to let her go to help them succeed.”
"High Voltage" is ready to shock viewers on October 19th, arriving in theaters in New York, Los Angeles, Boston, Chicago, and Detroit as well as on On Demand.
Posted by A Southern Horror Fan