My Review Of "Grim Reapers" 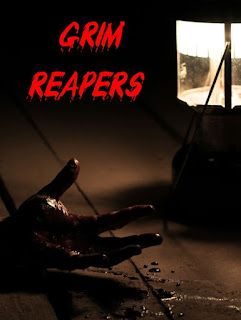 Synopsis: While Jay, a young teenager, searches for his missing father at a remote house in the woods. Something dark and sinister begins to stalk and terrorize he and his friends.

Saint's movie is a slow-burn psychological character driven drama with simple, direct dialog, spooky atmospheric scenes framed obscurely or artistically that really plays up the more emotional, anticipation effect. "Grim Reapers" deals with a tragedy that leaves family members grappling at reasons for why it happened? It is a darker story, and there is no real "white light" outcome for those searching for resolution, or understanding to the tragedy. There is only more tragedy told in semi-tense flare reminiscent of directors like Derek Cole and Jordan Pacheco.

The cinematography and blend of classic obscure angles, and claustrophobic close up shots are amazingly well handled for a first time feature director working on a indie film with a budget this low, The direction that Cade Saint has taken is an even-paced, practical style that-in the dramatic, reminds me of giallo with the concentrated focus on the character development/emotional side of story telling. The splash of bright colors off-setting darker shadowy scenes, the instrumental music score that accompanies the moments all are reminiscent of that classic psychological thriller style. Then the casual, short dialog scenes mixed with the shaky camera "wordless" action scenes that move the story along have a more modern, "retro-visioned" effect to the movie that gives me a Tai West feel. The down side is that the plot is not layered, or all that deep, and we never really know why it is happening, or how it came to be that this is the fate of these characters. Which is often the case in life. Sometimes things just happen-freaky, nightmarish, paranormal things that have no reason.

The special effects are mostly "scare tactics" meant to give sudden shock response from the viewer, with some creepy, background shadowy effects and the build up of suspense providing most of the chilling nature that brings in the horror aspects to "Grim Reapers". For the most part this is a very drama, psychological driven movie, with the only real "horror" moments happening in the final scenes of the film. It is a bit frustrating, you wait for quite awhile for anything that most horror fan's deem "horror" to actually take place, and Saint mildly tiptoes around those scenes instead of giving us full on gratuity of gore. If I had to choose a label for "Grim Reapers"  I would label it "horror light".

Now honestly if I went into this film as just a horror fan wanting to see some carnage, this film would disappoint me big time. However I love the art of cinema so there is so much more that sparks value in me when watching horror or sci-fi movies than just the kills, and gore. Overall "Grim Reaper" will not fit with what is traditionally known as "horror genre" fans. There isn't enough scares or gore to delight hardcore horror fans here, but considering the emotional, above par production level, atmospheric cinematography, and quality sound of "Grim Reaper" I am pretty impressed with Cade Saint's directorial debut. I don't consider it to be straight up horror, more of psychological thriller that ends on a very horrific note. Watch with patience.
Posted by A Southern Horror Fan