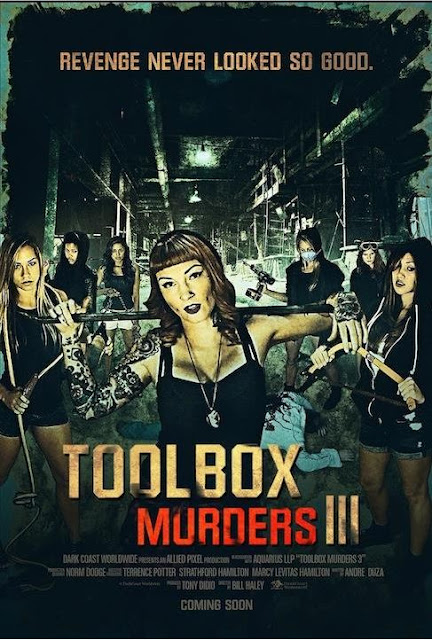 A crowd funding campaign has started for cult horror sequel "Toolbox Murders III". The guys are seeking funding over on Indiegogo for the project which hopes to get enough money collect to attract Sheri Moon who did in the opening of the reboot back in 2003, and possibly David Arquette. The announcement comes on the heels of the release of "Toolbox Murders II" release date announcement of August 4th, 2015.


"Toolbox Murders III" featuring a revenge story with sexy female killers.
The city at night. Home to murderers, rapists, pushers, and thugs. A broken system that releases them as fast as the police can lock them up. Out of the darkness, a new threat emerges, born of violence, charged with vengeance, armed with tools, they hand out justice with extreme prejudice.
Judge. Jury. Executioner.
A recent wave of violent, vigilante murders has rocked the Philadelphia underworld. Rumors abound of a gang of faceless, hooded killers who use tools to dole out justice become the thing of legend in the streets, and polarize the public on either side of the issue. Torn between his duty and his frustration with a broken system that releases criminals as soon the police can lock them up, it’s up to Detective Jake Marcum and his partner Redd Simmons to solve the case before the city erupts into violence. What they find threatens to bring down the very system that they’re sworn to serve.
Posted by A Southern Horror Fan