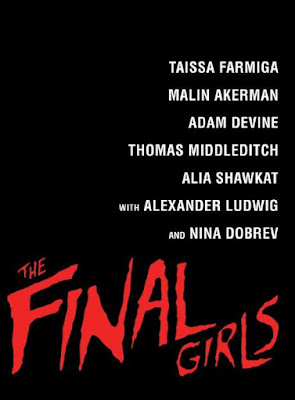 The first official trailer for horror comedy "The Final Girls" has been released. The film is directed by Todd Strauss-Schulson. Based on the cool cast of "The Final Girls" this is gonna be one fun flick! The story revolves around a young woman grieving the loss of her mother, a famous scream queen from the 1980's, who finds herself pulled into the world of her mom's most famous movie. Reunited, the women must fight off the film's maniacal killer.

When Max (Taissa Farmiga) and her friends reluctantly attend a screening of "Camp Bloodbath," an infamous ‘80s cult horror film that starred Max’s late mother (Malin Akerman), they are accidentally sucked into the silver screen. They soon realize they’re trapped inside the movie and must team up with the horny, regan-era idiot “Camp Bloodbath” counselors -- including Max’s mom as the shy scream queen -- to battle the film’s machete-wielding killer, Billy Murphy. Face to face with her mother for the first time in years, Max has a second chance not only to see her, but to save her, and with the help of her friends, get back home before Billy kills them all.