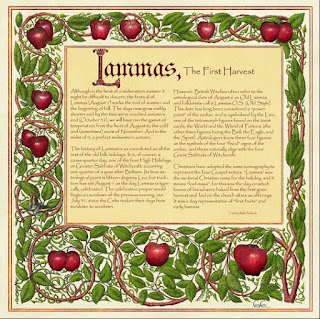 August 1 is Lammas Day , the festival of the wheat harvest, and is the first harvest festival of the year. I start my celebration on July 31st, which is also the Nordic festival Lithasblot. Lithasblot The harvest festival; giving thanks to Urda (Ertha) for her bounty. Often alms are given to the unfortunate at this time, or loaves in the shape of the fylfot (the Sun-wheel, which fell into regrettable disrepute during the dark times of the second World War when the symbol was perverted as a symbol of chaos and darkness).


(Frey Fest/Lughnasa/Lugnasad/Lammas) is an Irish Gaelic name for the feast which commemorates the funeral games of Lugh, Celtic god of light, and son of the Sun.  In the mythological story of the Wheel of the Year, the Sun God transfers his power into the grain, and is sacrificed when the grain is harvested. Lammas is a festival celebrating the first fruits of harvest, the fruits of our labours, and seeing the desires that we had at the start of the year unfold so rituals will be centred around this.  Lammas is an early Christian festival, "lammas" means loaf mass and represented the first loaves baked from that years crop. These were taken to church and laid on the altar.
It's a time for bread-making and corn-dollies. Goddesses celebrated around this time include Demeter and Ceres. Trees associated with Lammas are Hazel and Gorse and herbs are Sage and Meadowsweet. Colors associated with Lammas are golds, yellows and orange for the God and red for the Goddess as mother. 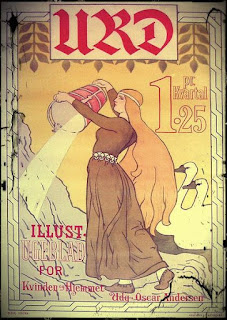 Lithasblot has long been associated with ceremonial magic and magical workings. Urda is one of the Norns in Norse mythology. Along with Verðandi (possibly "happening" or "present") and Skuld (possibly "debt" or "future"), Urðr makes up a trio of Norns that are described as deciding the fates of people. Urðr is attested in stanza 20 of the Poetic Edda poem Völuspá and theProse Edda book Gylfaginning. Urðr is together with the Norns located at the well Urðarbrunnr beneath the world ash tree Yggdrasil of Asgard. They spin threads of life, cut marks in the pole figures and measure people's destinies, which shows the fate of all human beings and gods. Norns are always present when a child is born and decide its fate. The three Norns represent the past (Urðr), future (Skuld) and present (Verðandi). Urðr is commonly written as Urd or Urth. In some English translations, her name is glossed with the Old English form of urðr; Wyrd.

Incidentally the holidays fall on a rare Blue Moon which doesn't happen again until 2018. A “blue moon” has nothing to do with the lunar orb’s color but commonly refers to the second of two full moons that occur in a single calendar month. According to the “Morris Dictionary of Word and Phrase Origins,” the first recorded English usage of “blue moon” dates to 1528. Maine Farmers’ Almanac defined a “blue moon” as the third full moon in a season with four full moons instead of the typical three. The third, and not the fourth, full moon was considered to be the extra one in order to keep named moons, such as the harvest moon, linked to proper times of the year. 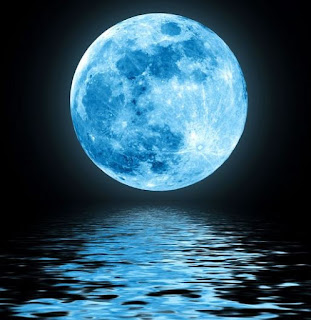 There is no real significance documented in paganism historically that would suggest the blue moon is mystically endowed with more power, but I choose to see it as pretty significant. It is a rare event. And since it is taking place during the first harvest festival I find that pretty special. So I think that the magic of the moon will have a little extra "umpf" in it this weekend. I plan to celebrate starting tomorrow with making a few crafts, a feast based on my go-to country garden foods. Wheat Bread, Butter beans, potatoes and onions, collard greens, and ham. I will have enough for both Lithasblot and Lammas. I will decorate my altar and light the candles. Do a little cleansing and send out good vibes as I meditate. Plus I will write down a prayer, some wishes to be sent out to the universe and declaration of devotion and thanks to gods and goddesses. I usually wrap the message with incense and dried flowers and tie it with hemp twine. I place it deep within the bonfire and focus on what I have written down as the fire burns and smoke washes over me! It has become my personal tradition. Anyway I hope all have a blessed festival weekend!