My Review Of "The Changing Of Ben Moore" 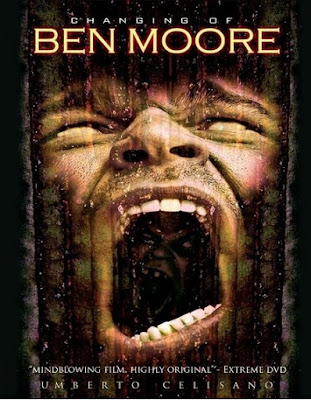 "The Changing Of Ben Moore" is a found footage horror directed by Jason Mills. It frames a pretty interesting set of events with the low budget video diary format. This choice actually gives the indie horror a bit more validity than had they tried for the more documentary, reality approach that more often than not cripples a found footage movie. "The Changing Of Ben Moore" stars Umberto Celisano, Corey Beaulieu, David Lloydy, and Bruce Novakowski.

Synopsis: A young man with no recollection of his childhood starts on a journey of self-discovery. While living in his aunt's house alone, Ben starts developing irregular sleep patterns. His brother Derek, skeptical of Ben's health and well-being starts filming a video journal to capture Ben sleep walking while having nightmares. Ben has a hard time remembering these night time occurrences while his brother and friends slowly start to realize things are not what they seem with Ben's sleep psychosis. When Ben's dog is found dead and his girlfriend goes missing, his quest turns to discovering who is responsible. His deeply concerned friends soon realize they are part of a demonic nightmare.

The story is a nicely constructed slice of self-discovery that morphs into horror actualized. It is a journey that seems to be taken lightly by both the main character and his friends. All of which is told through video dairy clips. Ben and his friends spend the majority of the time bouncing back from freaked-out concern to "party" mode during the course of the events. Luckily for us "The Changing Of Ben" is a total existential experience because it would just be too much melodrama and time filler. Mills brings in a "predator-prey" component which really sells the horror elements of the story. Most of which is given by a cast that has committed to their characters. Some of the line delivery and scenes fall a bit flat for a moment but I never lost complete interest, or lost the connection with the story.

The special effects are pretty standard affair for a film of this budget. The creature effects used for the metamorphosis moments of Ben's transformation work nicely for what they were. Budget size really isn't an obstacle if conviction and creativity are involved. And Jason Mills and his team obviously know that because I found those moments convincing. The other special effects used are the camera gimmicks associated with the found footage subgenre, and the gore is a blend of CGI and practical effects. Mostly the film builds its chills and suspense with the drama and heightened emotional state of the characters. Sometimes it works, other times not so much. Still all things considered there are some really cool, creepy moments in "The Changing Of Ben", and Jason Mills is methodical, conscientious, and decisive when it comes to making sure that the story, and his vision is delivered from start to finish. Overall I was impressed with this one. It is a bit mediocre on the horror side, and kind of text book as far as style of found footage that it is, but there is some nice character development, creepy atmospheric moments, a little comic relief, and nice special effects and creature makeup in "The Changing Of Ben".
Posted by A Southern Horror Fan