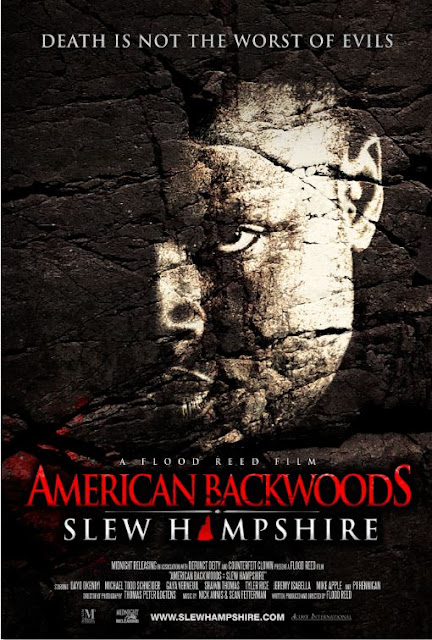 I cannot state enough how much I loved this movie! It was jaw-dropping, entertaining, and beyond bizarre. I can however send you over to read my review!

In honor of cast member Dayo Okeniyi's appearance in the newest installment of the Terminator franchise, the team behind American Backwoods: Slew Hampshire has released a new poster and three new exclusive teaser clips featuring their lead actor.

In addition to his role in Terminator: Genisys, Okeniyi has typically played supporting characters in Hollywood films like The Hunger Games and Runner Runner - but his work in American Backwoods: Slew Hampshire represents his first as a leading man.  Despite being his only foray into the horror genre to date, his performance as "Bro" - the reluctant hero amidst an ensemble of creeps, cretins and creatures - has been widely lauded and even garnered him a nomination for "Best Actor" at the Shockfest Film Festival.

Since its release in June, American Backwoods: Slew Hampshire - which was awarded "Goriest Scene of the Year" by Rue Morgue Magazine - has been recognized as a stand-out amongst this year's crop of indie slashers and has been racking up recommendations by online horror critics.  In addition to the newly released exclusive teaser clips, their official full-length trailer is linked below.  Also, three previously released teaser clips are viewable on their youtube channel.