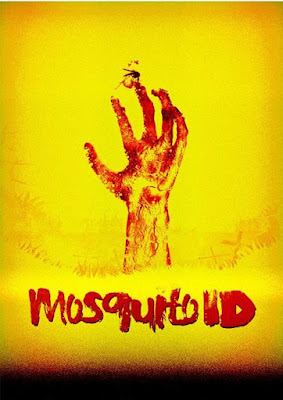 The aliens have landed and they are out for blood! Brazil is under attack from mosquitoes from outer space in new creature feature "Mosquitoid". Check out the teaser unleashed for the movie. A crowd funding campaign has kicked off for what looks like one cool ass, entertaining ride into monster horror! The campaign is happening on Indiegogo so go check out all the lovely stuff to pick from by funding this one!

"Mosquitoid" is directed by  André and Marcos de Castro and filmed with the same concept that brought "Grindhouse" to life. The film tells the story of a giant mosquito from Planet Endfly, who finds a crack in a black hole in space and comes to Planet Earth. When he comes to Ribeirão Preto, a city that is experiencing an epidemic of the same mosquito, because of the excess of still water, he promotes chaos. His bite is deadly, it's not like the normal mosquito. His giant stinger kills the person's immediately, however, its venom takes effect. The dead turn into zombie-mosquitos and attack the city's population. In the story there are several characters. The mosquito goes through numerous funny situations because of his personalities. Mad scientist, drag queen in the adaptation process, frenzy in sorority, clumsy soldier, sensual colonel, two crazy hippies, space warrior, among others. All this washed down with very black humor, blood and some sensuality.


Read my thoughts on Mosquitoitd here! Alien Mosquitoes Out For Blood!
Posted by A Southern Horror Fan